Learn the methods we recommend for deciding the cities you should be comparing your city's data.

Written by Jennifer Funk
Updated over a week ago

Comparing your city's data to peer cities, or cities that are similar to yours, can help put the numbers in your dashboard or report into perspective. To provide context you can always compare your study area to the United States to show how you stack up to the Nation's average, but to get a more tangible comparison, adding peer cities can be beneficial.

The point of peer cities is to provide a comparison. In the mySidewalk Platform you can compare up to 6 different areas. Providing both cities you aspire to be like and cities that are more directly comparable currently will provide a wholistic image of where your city stacks up on a number of metrics.

To determine a peer city, mySidewalk has developed a methodology using variables to assess the differences in size, growth, affluence, diversity, affordability, and place to differentiate metro areas from one another.

Using a k-means clustering algorithm, we sorted all U.S. metro areas into 60 categories. Kansas City's peer group as defined by this clustering algorithm differs substantially from the cities it often lists as its peers. This difference is represented in the radius chart below, where each metro area is ranked based on a normalized and scaled set of variables in each category. Kansas City (the city of interest in this example) is shown in red, compared to its peers identified by the clustering algorithm in yellow, and its aspirational cities in green. 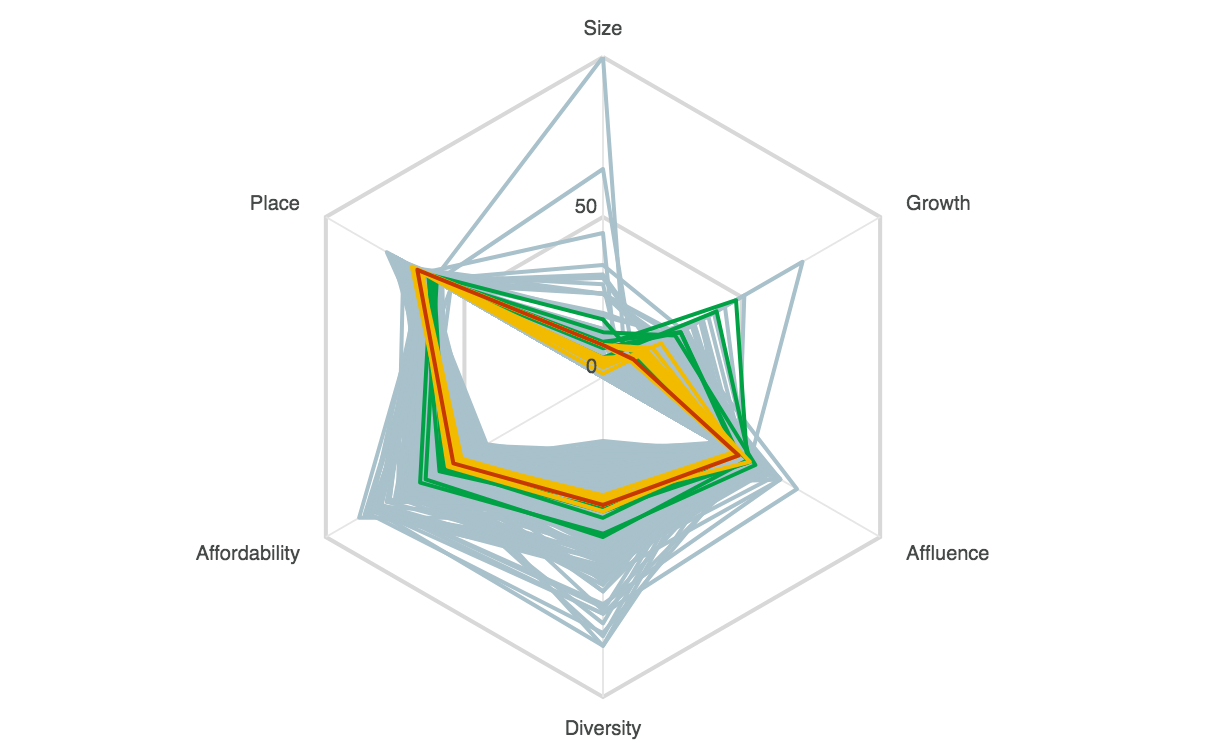 If I'm in Kansas City I might think my peer city is Austin, Texas, but in reality, based on our methodology, Austin is an aspirational peer city. Kansas City's current peer cities are Omaha, Des Moines, and Louisville, among other midwestern cities.

For more information about finding your peer cities, reach out to your CDM or the mySidewalk team at [email protected].

Did this answer your question?