Learn about the sixteen geography types in mySidewalk

Written by Drew Stiehl
Updated over a week ago

All data in mySidewalk has three fundamental characteristics: when, where, and what. This allows users to quickly find answers to the questions that matter most to our communities. In this article, we’ll talk about how mySidewalk handles the “where.”

One of the first things people notice about mySidewalk data is that everything has a location. It doesn’t matter if you’re making a map, a bar chart, or a callout: to select data, you also have to select a geography.

This "Russian-nesting doll" relationship between Census geographies is exclusive, which means that each block fits inside one and only one block group. Each census tract can belong to only one county, and each county can fall inside only one state. There are no exceptions to this rule for standard Census geographies. 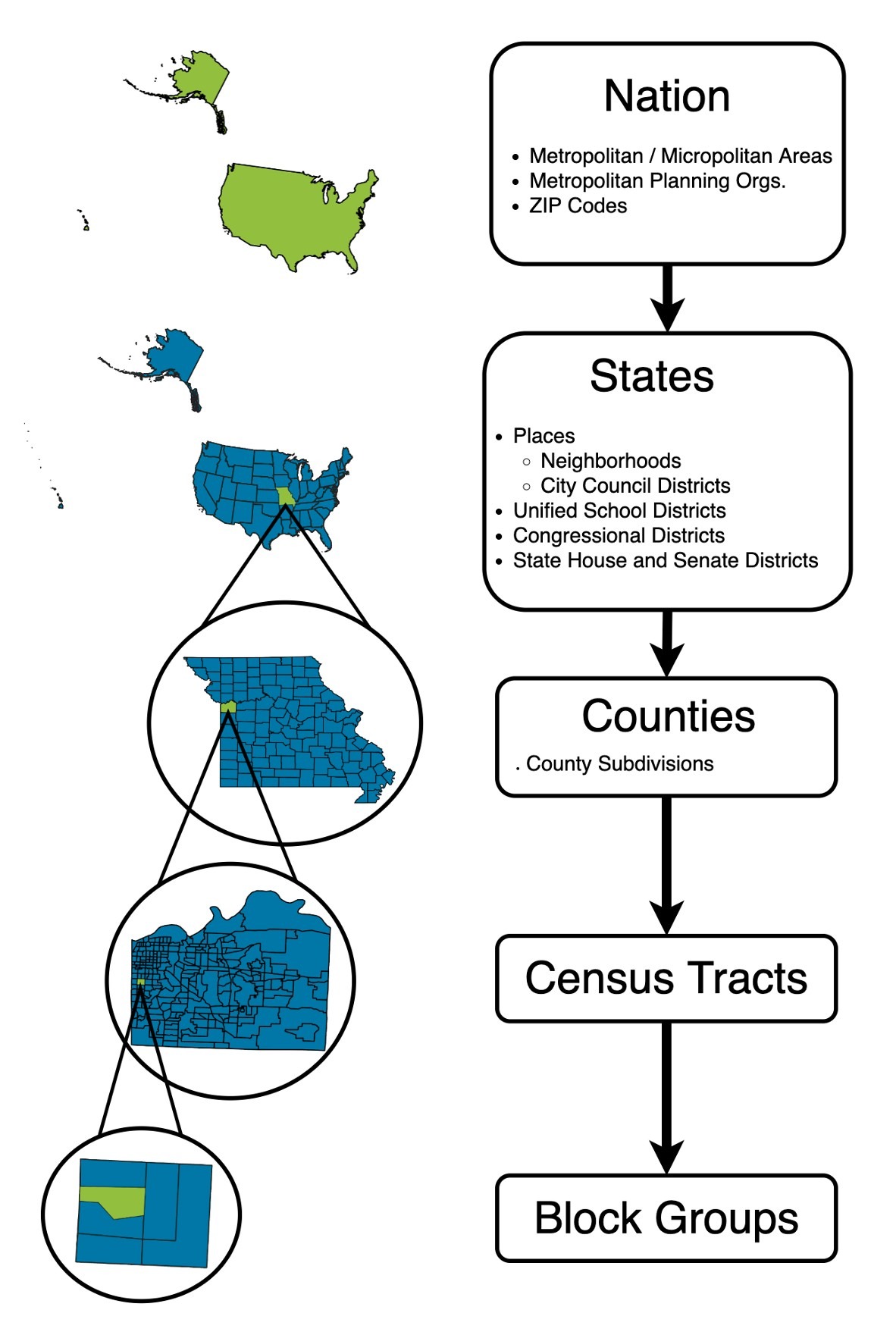 But many other geographies don’t nest within each other. Places, for example, are always within a single state, but frequently cross a variety of other boundaries. One census tract may fall into multiple neighborhoods, or sit at the confluence of multiple zip codes.

Let’s learn a little bit more about each of the geographies available in mySidewalk.

This section provides definitions for each of the sixteen geographies available in mySidewalk.

The State geography represents each of the individual 50 states and the District of Columbia.

Counties are the primary administrative divisions for all but two states. Instead of counties, Louisiana has parishes, and Alaska has boroughs. Each of these exceptions are included in the county geography in mySidewalk. A few additional exceptions include:

Places are what most of us know as cities. An incorporated place is established to provide governmental functions for a concentration of people. Unincorporated communities may also be included in the “place” definition as Census Designated Places (CDPs). There is another grouping called "minor civil division" so if you can't find your city in places, check out the "county subdivisions" section below.

The Census excludes the following from its definition of “place”:

Congressional Districts are the 435 areas from which members are elected to the U.S. House of Representatives.

The Federal Highway Act requires all urbanized areas with populations over 50,000, as determined by the Census, to be represented in the federal transportation planning process by a Metropolitan Planning Organization, or MPO. In most cases, MPOs represent local governments that together comprise at least 75 percent of the population that would be impacted by federal transportation projects. These boundaries are produced and distributed by the US Department of Transportation (USDOT).

ZIP Codes are mail delivery routes used by the US Postal Service (USPS) and not actually physical boundaries. The US Census undertook an effort to create boundaries, called ZIP Code Tabulation Areas (ZCTAs), as approximate boundary representations of those mail delivery routes. mySidewalk uses the ZCTAs. The ZIP Code geographies are not contiguous across the US and not all ZIP Codes are represented by a ZCTA. Visit the Census website for more information on how ZCTA boundaries were created.

These are the areas from which members are elected to a state senate or legislative equivalent.

These are the areas from which members are elected to the respective state’s house of representatives or legislative equivalent.

County Subdivisions are the primary divisions of counties and equivalent entities (e.g. boroughs and parishes). They include census county divisions, census subareas, minor civil divisions (MCDs), and other unorganized territories. MCDs include areas such as charter townships, reservations, towns, townships, etc. In 12 states (CT, ME, MA, MI, MN, NH, NJ, NY, PA, RI, VT, and WI), MCDs are the equivalent of Place geographies in their purpose and function.

How Frequently Does mySidewalk Update Geographies?

As we mentioned earlier, mySidewalk acquires the majority of geographies from US Census cartographic boundary files. New boundaries for the Census geographies are released each year.

We update the Census geographies to match the most recent 5-year American Community Survey (ACS) estimates provided by the US Census Bureau. The vintage of the geographies matches the last year of the 5-year estimates. So for ACS 2016-2020, we will update all of the data values in mySidewalk products and then update the geographies to the 2020 vintage. The update of geographies typically occurs annually in January, though is dependent on the release date of the ACS estimates.

For shapes that do not come from the Census (MPOs, Neighborhoods, and City Council Districts), our update schedule works a little differently. Because MPO boundaries are governed and provided by the USDOT, as opposed to the Census, we update these annually in August.

Neighborhood and City Council Districts are geographies built and maintained by mySidewalk. We update these ad-hoc a few times per year as requested by customers. We review Neighborhood and City Council Districts every summer and provide the updated boundaries and associated data every August. If a change has happened to boundaries in your community, please notify your Customer Success Manager, and we will add your boundaries to our update list.

Check out mySidewalk’s other Help Articles on maps and geographies:

How to Change Default Geographies

Create a Map from data

The Department of Transportation’s Overview of Metropolitan Planning Organizations

Did this answer your question?